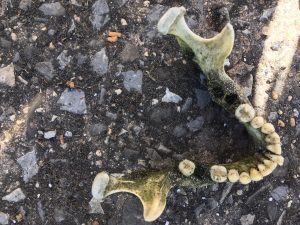 Three years after the body of a young woman was discovered along the shores of Jamaica Bay, New York, her lower jawbone was found during a coastal cleanup by a Charleston-based organization. Despite the discovery, the woman remains unidentified.

On Saturday, May 18, 2019, volunteers with Wounded Nature, a Charleston non-profit organization that removes trash and debris from coastal areas, discovered the lower jaw of a human in the marsh area along the Jamaica Bay shoreline. National Park Police along with NYC Police responded and verified it was a human jawbone and called in the Medical Examiner’s office.

The NYC Medical Examiner’s office conducted DNA tests and found a match to a body that had been found in Jamaica Bay on October 18, 2016. Unfortunately, the body has not yet been identified but has some distinctive tattoos including a panther with claws on the abdomen, black cross on right ring finger, a needle through a tongue on the left back shoulder among others.  To view the tattoos and other details, click here.

The New York Police Department and Medical Examiner’s office would like the public’s assistance in identifying this body.  If you have any information that can lead to identifying this woman, please call the NYPD Missing Persons Squad at 212-694-7781.