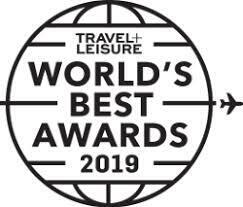 The Holy City is in seventh heaven!

For the seventh straight year, readers of Travel + Leisure magazine have named Charleston the Best City in the U.S. in the publication’s annual World’s Best Awards. In addition, the Holy City was slotted in as the 12th best city in the world.

The magazine had the following to say about Charleston’s top ranking:

“There are endless reasons to love Charleston: The dreamy Spanish-moss-draped oaks. The candy-colored row houses. The punches-above-its-weight food scene. The history….Its magic, perhaps, lies in an alchemy of old and new, genteel and unpretentious, city glamour and nature at your fingertips.”

Travel + Leisure‘s 2019 World’s Best Awards Survey is based on readers’ votes in categories like landmarks, culture, cuisine, friendliness, shopping, and overall value. The Holy City topped No. 2 Santa Fe and No. 3 New Orleans on the U.S. list.

Hoi An, Vietnam topped the World’s Best City list, besting San Miguel de Allende, Mexico, the winner the last two years. Charleston ranked first in the world back in 2016 and remains the only U.S. city to ever top the list.