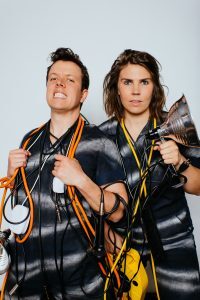 Local comedy duo Nameless Numberhead returns to Theatre 99 on July 27th for an encore performance of their Piccolo Fringe show.

The group, consisting of Maari Suorsa and Henry Riggs, continues to blend hilarious comedy with theatrical flare as they build a full set right in front of the audience over the course of the show. Topics for their latest work include podcasts, craft beer loving bros, motherhood, sports, relationship troubles, and our society’s obsession to find connections in everything we do. Theatre 99 artistic directors Brandy Sullivan and Greg Tavares enjoyed the new show so much they decied to bring it back.

It’s been a busy year for Nameless Numberhead who have worked with the Charleston Music Hall on a series of promotional videos, collaborated with the band Shovels and Rope on a concert film to be released later this summer, and produced the popular monthly alternative comedy series Rip City CHS.

You can find more information at www.numberheadcomedy.com.