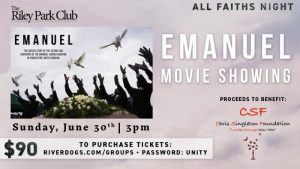 The Charleston RiverDogs will provide the Lowcountry a final opportunity to view the Emanuel documentary as part of “All Faiths Night” on Sunday, June 30th at Riley Park. The recently released film highlights the untold story of the victims and survivors of the 2015 Charleston Church Shooting. The film comes from Executive Producers Stephen Curry and Viola Davis, Co-Producer Mariska Hargitay, and Director Brian Ivie. You can see a trailer for the film below.

On June 30th, the RiverDogs will open the doors of the Riley Park Club for the “All Faiths Night” event, that will feature a showing of the documentary, followed by a panel featuring individuals who played a vital role in the making of the film. Panelists will include Chris Singleton, RiverDogs Director of Community Outreach and son of victim Sharonda Coleman-Singleton, Reverend Anthony Thompson, the husband of victim Myra Thompson, and Emanuel producers Dane Smith and Pastor Dimas Salaberrios. RiverDogs President Emeritus Mike Veeck will serve as the panel moderator.
“This event means the world to me,” Singleton said. “It’s the first official event that will benefit my non-profit organization. I’m looking forward to seeing the Charleston community attend this event and sharing my thoughts and feelings about this amazing film.
Tickets are $90 and can be purchased by visiting www.riverdogs.com/groups and entering the Password: UNITY. Proceeds from ticket sales to this event will benefit the Chris Singleton Foundation, which spreads the message of inspiration, love, and unity to youth and youth organizations.
“Chris [Singleton] has been a tremendous addition to the RiverDogs staff and has already made a measurable impact in our community efforts since coming aboard,” RiverDogs President and General Manager Dave Echols, said. “We are honored to offer our Riley Park Club as the venue for the final opportunity for fans to view this impactful and important documentary in the Lowcountry.”
Admission includes the Emanuel documentary showing and post-film panel, as well as access to the Riley Park Club for the Charleston RiverDogs ‘”All Faiths Night” game against the Asheville Tourists at 5:05 pm that evening. Doors will open at 3 pm, and the program will run for two hours. The post event-reception includes all-you-can-eat food catered by Mercantile + Mash, with beverages including beer, wine and soft drinks. Availability for the event on a first come, first serve basis.

“Drink the Plank” Saturday at the Charleston RumFest