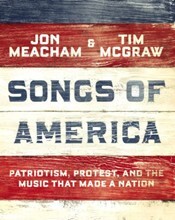 What do you get when you cross a Pulitzer Prize winning New York Times best selling author and one of the superstars of country music. The end result is ‘Songs of America’ a salute to ‘Patriotism, Protest, & The Music That Made A Nation’ by Jon Meacham and Tim McGraw. Already praised by some of the best authors and musicians in the land, ‘Songs of America’ is an ideal blend from a man who writes about this country, and a man who sings country tunes.

A noted historian and visiting professor at Vanderbilt University, Meacham’s biographies cover Thomas Jefferson (The Art of Power), Andrew Jackson (American Lion), Franklin and Winston : An Intimate Portrait of an Epic Friendship (FDR & Churchill), Destiny of Power (An American Odyssey) on George Herbert Walker Bush, and books dealing with wars and civil rights. With 43 Top 40 singles on the country charts including 16 number ones, McGraw is without a doubt one of Nashville’s most prized singer songwriters, with a career spanning more than a quarter of a century.

Together the two heavyweights have explored the origins of American music, tracing patriotic roots back to the Revolutionary War, the Civil War, two World Wars, the beginnings of rock n’ roll, the Civil Rights movement, the Vietnam War, all the way through the 21st century American struggles, including renewed allegiance to the United States after the attacks of 9/11.

McGraw and Meacham who are neighbors in Nashville, have become friends over the years. According to excerpts taken during an interview on McGraw’s Twitter feed, writing the book just happened. “We never talked about doing a project together. We were just enjoying lunches and dinners with friends, talking about history and current events. It sort of organically happened.”

From the same Twitter interview, Meacham jokingly blames their historical and musical narrative on McGraw. “Well it’s your fault actually. It was Tim’s good question. Tim asked me one day on our porch, he said, ‘have you ever thought the role music played in these moments you’ve written about?’.”

Meacham goes on to say, “When someone asks you a good question it often leads to something very important, or can lead to something important.” He adds, “Did you think about what the people were listening too and how it shaped them through the years. That was kind of a eureka moment for me, and so we just jumped right in.” That was the beginning for the project.

Minus the credits and acknowledgements, ‘Songs of America’ is 230 pages of songs and circumstances that helped shape the greatest nation on God’s green planet. From freedom hymns to Springsteen’s ‘Born In the USA’, ‘Songs of America’ chronicles the struggles and triumphs brave men and women sacrificed over nearly 250 years to advance American patriotism.

From battle cries and bloodshed to Martin Luther King’s ‘I have a dream’, ‘Songs of America’ recounts more than two centuries worth of stories, striking a familiar chord with each historical archive. Meacham & McGraw revisit America’s most epic eras and decades, beginning with the birth of our nation through the rise of our nation’s first African American president.

‘Songs of America’ honor Americans from all walks of life and all backgrounds intertwined with the music from their generations, including our forefathers, our military, protesters, people of faith, and ordinary folks with a vision. If you embrace patriotism, heritage, musical symbolism, and the determination it took to record American history, than ‘Songs of America’ is a must read, and cherished book to add to your collection.

With its rich history dating back to the 1700’s Charleston no doubt holds a place in musical history, especially the Civil War (circa 1860’s), with Fort Sumter and the noted anthem ‘The First Gun Is Fired’ by George F. Root, detailing the events surrounding the attack on the Charleston Harbor. If you admire American history and symbolic music than ‘Songs of America’ the book and the tour may very well renew your love for this country. A great summer read at the beach or the lake.

For American history buffs nothing is more compelling than a good read on what shaped this great nation of ours, but better yet when a new book is unveiled what could be more awesome than to have the authors illustrate it with back stories and humorous subtext! On Tuesday (Jun 11th) that’s precisely what Meacham and McGraw did before a near sellout crowd at the Gaillard Center.

It was easy to tell the two are long time friends and neighbors from their humorous banter and down home delivery. With 11 period piece American flags hanging overhead and a four piece combo behind them, Meacham and McGraw draw attention to American history through music from the comfort of two chairs, that could have easily been their front porches.

After the National Anthem is performed, snippets of iconic speeches from former United States presidents open the show, ushering the band and their authors into place. Meacham sets the tone taking the audience on a quick trip throughout history, before beginning the night a decade prior to the revolutionary war.

Over the next two hours Meacham and McGraw carry the audience from the 18th century to the 20th century, making stops at the War of 1812, the Civil War, World War I, World War II, Vietnam, and the modern era. While Meacham narrates, McGraw offers up songs that paint a vivid picture of Americana’s yesteryear, each moment in time prefaced with articles that brought the songs to light.

Along the way there are recollections of Jefferson, Andrew Jackson, Gettysburg, the Women’s Suffrage movement, FDR, Rosa Parks, Bob Dylan, Bruce Springsteen, and Lee Greenwood. Whether McGraw is singing anthems or protest songs, Meacham assures the audience, America exists and is better because of both. Meacham further adds, patriotism and protest are likes wings of an eagle, taking flight to help bring our nation together rather than separate us.

The ‘Songs of America’ tour is scheduled for seven cities over two months, but I expect with the crowd appreciation the promoters and the book publishers might consider adding more. With all the discourse in America today, the daily plights between Democrats and Republicans, liberals and conservatives, red versus blue states, ‘Songs of America’ remind us of Jefferson’s phrase ‘all men are created equal’. Perhaps we have more in common than not.

‘Off the Chain Sandwich Shoppe’ Anything But Ordinary