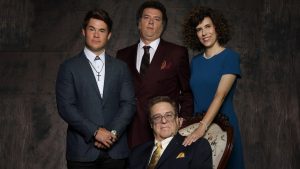 HBO today released an official teaser video for The Righteous Gemstones, an upcoming comedy series that was filmed in the Charleston area and stars Danny McBride, John Goodman, and Adam Devine.


The half-hour comedy show, which is scheduled to debut sometime in August, tells the story of a world-famous televangelist family with a long tradition of deviance, greed, and charitable work. The series also stars Edi Patterson, Cassidy Freeman, Tony Calvero, Tim Baltz, and Greg Alan Williams. Walton Goggins will also have a recurring role.

In addition to starring in the show, McBride also created, wrote, and directed the program. It follows the two-season Vice Principals, which was also filmed in the Lowcountry. McBride also executive produced the series alongside Jody Hill and David Gordon Green, who he’s partnered with on several other projects (Halloween,The Legacy of a Whitetail Deer Hunter, Vice Principals).

The vast majority of filming for The Righteous Gemstones took place in the Charleston area and numerous locals were cast as extras, so local viewers are likely to see plenty of familiar places and faces. McBride, following the two-season Vice Principals.

You can watch the teaser below: