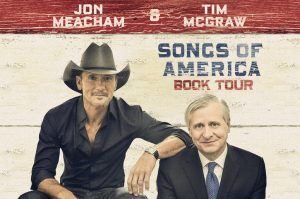 Grammy award-winner Tim McGraw and Pulitzer-Prize winner Jon Meacham are embarking on a national seven-city tour to support their book, Songs of America: Patriotism, Protest, and the Music that Made a Nation (available for pre-order here). Their travels include a stop at the Gaillard Center on Tuesday, June 11th at 7:30 pm.

Tickets go on sale for the general public on Friday, April 19th. Visit www.SongsOfAmericaBook.com for complete information. Each ticket for the Songs of America Book Tour includes a copy of McGraw and Meacham’s forthcoming book, Songs of America: Patriotism, Protest, and the Music that Made a Nation (a $30 value).
According to a press release for the book, Songs of America is “at its heart a celebration of America and the music that has inspired us. Through years of strife and triumph, America has been shaped not only by our leaders, our words and our deeds, but by our music—by the lyrics, performers and instrumentals that have carried us through dark days and enabled us to celebrate bright ones. From the ‘Star Spangled Banner’ to ‘Born in the USA,’ McGraw and Meacham take us on a journey illuminating the eras of history through the music of those times—from the Revolutionary War to the present—that helped define American culture.”
During their tour, McGraw and Meacham will give a behind-the-scenes look at what went into creating the book, and their friendship as they combine their individual perspectives as writer and artist to create a unique view of the role music has played in uniting and shaping our nation.
ABOUT THE AUTHORS

Tim McGraw’s career includes 43 number one radio singles, 16 number one albums, and countless industry awards and accolades. His unique chart achievements include having three singles in the Top 20 of the radio charts on multiple occasions, as well as having two singles spend over 10 weeks at number one.
Jon Meacham is a Pulitzer Prize–winning biographer. The author of the New York Times bestsellers Thomas Jefferson: The Art of Power, American Lion: Andrew Jackson in the White House, Franklin and Winston, Destiny and Power: The American Odyssey of George Herbert Walker Bush, and The Soul of America, Meacham holds the Carolyn T. and Robert M. Rogers Chair in the American Presidency and is a distinguished visiting professor at Vanderbilt University. He is a contributing writer for The New York Times Book Review, and is a fellow of the Society of American Historians.

Galactic Pub Crawl to be held on May the 4th