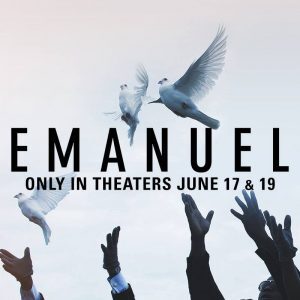 The official trailer for Emanuel, an upcoming documentary about the 2015 Emanuel AME Church shooting, its nine victims, and the community, was released on Monday. You can see the preview in its entirety below.

The film, which was executive produced by Golden State Warriors point guard Stephen Curry and Academy, Emmy, and Tony Award-winner Viola Davis, will be in a limited amount of theaters for two days only – June 17th and 19th. Locally, the documentary can be seen at the Regal Palmetto Grande in Mt. Pleasant, the Regal Charles Towne Square in North Charleston, and the Movies 8 in Summerville.

Emanuel tells the story of the massacre at Mother Emanuel through the eyes of surviving relatives, journalists, local officials, and more. The official website states that the documentary “powerfully weaves the history of race relations in Charleston, the significance and impact of Mother Emanuel Church, and the hope that somehow emerges in the aftermath. Featuring intimate interviews with survivors and family members, Emanuel is a poignant story of justice and faith, love and hate, examining the healing power of forgiveness.”

According to the Post & Courier, the film was “made in direct partnership with the city of Charleston and the families affected by the tragedy. The producers of Emanuel are donating their share of profits from the film to the survivors of the shooting and the families of the victims.”

Tickets can be purchased now through https://www.emanuelmovie.com.

The film was directed by Brian Ivie, produced by John Shepherd, Mike Wildt, and Dimas Salaberrios, and co-Produced by Mariska Hargitay.
–