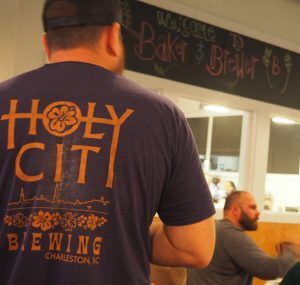 UPDATE – 4/19/19: Eater Charleston is reporting that as of today, Baker & Brewer can finally serve alcohol.

Holy City Brewing (HCB) & EVO Pizzeria today announced the opening of Baker & Brewer, a new downtown restaurant and bakery, at 94 Stuart Street. The establishment will open its doors for food at 5 pm, but patrons will have to BYOB as the venue cannot serve alcohol yet.

The plan is to eventually serve HCB beers and other alcohol, but the restaurant says it was denied licensing and has been told they “must fight for (it) in court.”

Holy City Brewery’s taproom on Dorchester Road will be offering patrons $30 grab-and-go cases or $6 growler fills to bring with them to Baker & Brewer.

After today, the Bakery will open daily at 7 am daily with fresh bread and pastries, while the pizzeria will open at 11 am.

Back in July, Holy City Sinner first reported on this joint venture, sharing that the space will feature a commercial bakery in the front, a pizzeria in the middle, and a brewery in the back area creating Holy City beers.

The pizzeria plans to eventually have twenty taps and a full liquor bar. The area will have both indoor and outdoor seating with a stage to host live music events on the patio.

The brewery in the back will also have its own flagship line of beers that will be exclusively sold at this new location. The focus will be on Belgian, French, and Wild ales on a five-barrel system. This small-batch brewery will also concentrate on experimental brews.

Desano Pizza was the most recent tenet at 94 Stuart Street. It closed in November 2017. 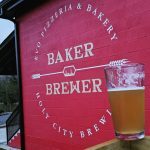 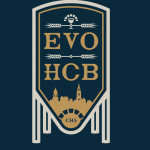 On October 19th, Sullivan’s Fish Camp will team up with winemaker Jeremy Carter of Tarpon Cellars for a special winner...