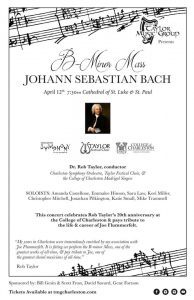 The Taylor Music Group presents its final concert of the 2018-2019 season, Johann Sebastian Bach’s B-Minor Mass on Friday, April 12 at 7:30 pm at the Cathedral of St. Luke and St. Paul, 126 Coming Street. Featuring the Charleston Symphony Orchestra, Taylor Festival Choir and the College of Charleston Madrigal Singers, the concert celebrates Director Robert Taylor’s 20th anniversary at the College of Charleston and pays tribute to the life and career of Dr. Joseph Flummerfelt.

“The CSO is delighted to partner with Dr. Robert Taylor, the Taylor Festival Choir, and Madrigal Singers to present Bach’s B-Minor Mass. Rob’s work with the Charleston Symphony Orchestra Chorus has noticeably impacted Charleston’s musical community for the better for more than 20 years. Our musicians are thrilled to perform one of the greatest sacred works ever composed under Rob’s baton, and to help celebrate his 20th anniversary at the College of Charleston,” said Michael Smith, Executive Director of the Charleston Symphony Orchestra.

“J.S. Bach’s B-Minor Mass is widely regarded as one of the greatest musical achievements in classical music. Bach specialist John Elliott Gardner said, ‘The B-Minor Mass carries a universal message of hope that can touch anyone regardless of culture, religious denominations or musical knowledge—springing out of the depth of the human psyche, rather than some topical or local creed.’ Accordingly, it is timely and significant that Dr. Robert Taylor and the Taylor Festival Choir are presenting this magnificent work at their concert at the Cathedral of St. Luke and St. Paul in downtown Charleston. Robert Taylor is well-known as a visionary, master interpreter of choral music of all types and descriptions, but at this particular time in American history, this particular performance of this towering work by J.S. Bach in Taylor’s capable hands promises to deliver a compelling and moving musical experience to everyone in the audience. It should not be missed!” said Ellen Dressler Moryl, former Director of the City of Charleston Office of Cultural Affairs and founding director of Piccolo Spoleto.

Yuriy Bekker, Principal Violinist and Conductor of the Charleston Symphony added, ”J.S. Bach’s B-Minor Mass is an incredible masterpiece that showcases the chorus, orchestra and vocal soloists. I have wanted to perform this piece with the CSO for a long time and I’m thrilled that we are finally doing this work to commemorate Robert Taylor’s twentieth anniversary in Charleston. Rob has contributed so much to Charleston’s arts scene. His leadership and his contributions to the CSO Chorus, College of Charleston Choir, and Taylor Festival Choir enrich our city greatly. I am very proud of him and am honored to make music with him. I am also excited to perform one particular movement from Bach’s Mass entitled ‘Laudamus Te.’ In this movement, the violin joins the soprano soloist in a moving duet. It will be very special to play this under Rob’s baton.”

“Charleston’s very best musicians will come together to perform one of the greatest masterpieces of western music. It is a fitting tribute to Rob Taylor’s twenty years of dedicated musical service and leadership in our community,” said Dr. Edward Hart, Chair of the Music Department at the College of Charleston.

“As a massive fan of early and historical music, I cannot even begin to put into words how humbling it is to perform as one of the soloists in Bach’s Mass in B minor. Having the opportunity to bring this work to life with the caliber of talents that make up the Taylor Festival Choir, as well as the Charleston Symphony Orchestra, is one of the best privileges I’ve ever had as a performer,” said New York City soprano Sara Law.

Tickets for the concert are 410 students, $25 general seating and $35 preferred seating. Tickets can be purchased at www.tmgcharleston.com and at the venue box office 30 minutes prior to the concert.

The Taylor Festival Choir has recorded on the Delos, Centaur, and MSR Classics labels. Their recent recording of BBC composer of the year James MacMillan’s Mass and Celtic Mass by Michael McGlynn received rave reviews throughout Europe. Their recording Sing We Now of Christmas, recorded with legendary guest artists including Liz Carroll, John Doyle and Kim Robertson, has been called “a choral feast that will linger long in your memory after you’ve heard it” (Audio Society of Atlanta). TFC serves as the professional choir-in-residence at the College of Charleston. It presents a full concert season in the Charleston area, and serves as the flagship ensemble for the Piccolo Spoleto Celtic Arts Series.

Personnel in the ensemble include conductors, educators, performers and professionals from throughout the United States. The Taylor Festival Choir performs the finest choral literature from all eras, with particular emphasis on new music and folk music from the Celtic nations. Dedicated to bringing the beauty and spiritual enrichment of choral music to as wide an audience as possible, the Taylor Festival Choir tours frequently, and performs outreach concerts in schools and churches throughout South Carolina and surrounding states. TFC toured Ireland with sister ensemble Na Fidleiri in 2013.

Night Ranger Plays the Charleston Music Hall in May