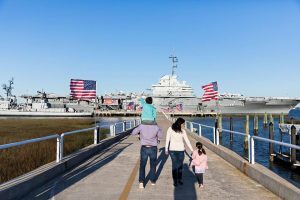 Patriots Point Naval & Maritime Museum is searching for World War II, D-Day veterans for a special program that will commemorate the 75th anniversary of the invasion of France on June 6, 1944. Those who can help the museum connect with D-Day veterans are asked to call 843-971-5046.

More than 160,000 American, British and Canadian troops stormed the beaches of France on June 6, 1944. In addition to manpower, 13,000 aircraft and 5,000 ships supported the operation. Patriots Point Naval & Maritime Museum is home to the USS Laffey (DD-724), one of only three remaining D-Day ships.

Specific details regarding Patriots Point’s June 6th program won’t be released until May. However, museum officials say they are planning to use video technology to connect representatives from all three remaining D- Day warships. The battleship USS Texas is a museum in La Porte, Texas. The British cruiser HMS Belfast is a museum ship in London.

“D-Day is the largest amphibious invasion in the history of the world,” said Patriots Point Executive Director Mac Burdette. “We want our 75th anniversary program to reflect the importance of that day properly, and are proud to have a piece of history here with us in the USS Laffey.  She’s part of a very small club of D-Day warships.

We’re going to do everything possible to connect all three organizations during our program. That’s never been done before and will make for a special moment.”

Report: SC is 5th Best State to be Rich or Poor (from a Tax Perspective)