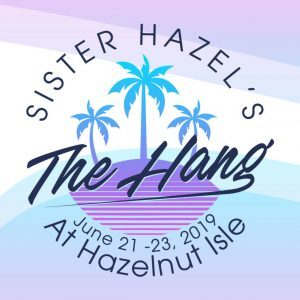 Platinum-selling band, Sister Hazel recently announced that the 14th Annual Hang at Hazelnut Isle will take place from June 21st to 23rd at the Windjammer on Isle of Palms. The 2019 beach bash will offer a weekend full of music, food, games, beach parties, and exclusive access to hang out with the band.

In addition, this year will include access to Sister Hazel’s merchandise sale and the return of the popular Saturday sunset concert on the beach. Tickets can be purchased here.

“We look forward every year to ‘The Hang,'” Jett Beres, bass player for Sister Hazel, said. “It’s a great opportunity for us to spend a beach weekend with the ‘Hazelnuts’ on the beautiful Isle of Palms.”

Sister Hazel kicked off the year with the release of their newest six-track EP, Fire. The album is the third volume of their collectible compilation series titled “Elements.” Fire, which debuted at #5 on the Billboard Independent Albums chart, can be purchased here and is also on all streaming services.

Originating from Gainesville, FL, Sister Hazel is best known for their song “All for You,” which topped the adult alternative charts during the summer of 1997. The success of that single propelled their album (…Somewhere More Familiar) to platinum status. In addition to events and touring, the band also gives back with “Lyrics For Life.” Founded by singer Ken Block, the charity unites musicians and celebrities for concerts and auctions to benefit cancer research and patient-care charities.
–