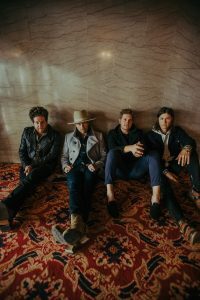 An impressive lineup of musicians, athletes and actors will join southern rock band NEEDTOBREATHE for the annual NEEDTOBREATHE Classic on Monday, March 25th at the Daniel Island Club.

Once again, this celebrity golf tournament has sold out all its golf foursomes. Last year’s tournament and musical event raised more than $200,000 for OneWorld Health. The Charleston-based nonprofit empowers communities around the world to achieve long-term improvements in health and quality of life. The annual golf tournament was started by Commonwealth Cares Foundation, the charitable foundation of Daniel Island financial services firm Commonwealth.

Attendees will spend the day playing golf before enjoying an evening concert featuring NEEDTOBREATHE and other musicians at the Charleston Music Farm. The concert is open to golf participants and sponsors only.

Slated to participate in this year’s NEEDTOBREATHE Classic are:

“We’re thrilled to have sold out more than a month in advance,” said Britt Gilbert, founder of Commonwealth Cares Foundation. “It just goes to show how many people are eager to join us not just for an incredible day of golf and music, but to support an organization that is truly saving lives around the world.”

“Each year we are blown away by the outpouring of support for this event,” said NEEDTOBREATHE’s Bear Rinehart. “These musicians, athletes and actors take time from their busy schedules to travel to Charleston and support our passion for OneWorld Health. We’re incredibly grateful for their help in raising money for medical clinics desperately needed in some the world’s most vulnerable communities.”

On the heels of the biggest and best-selling tour of their career, NEEDTOBREATHE recently kicked off their Acoustic Live Tour, in support of the band’s first-ever acoustic live album, Acoustic Live Vol. 1.

ABOUT COMMONWEALTH CARES FOUNDATION
Founded in 2007 as a 501(c)(3), Commonwealth Cares Foundation is the charitable arm of Commonwealth, a Daniel Island-based comprehensive financial services firm with a division focused on providing financial planning services to physicians and the medical community. The firm brings a values-based philosophy, offering clients independent advice through a consultative, team-oriented approach. For more information, visit commonwealthcares.org.

H A R D L O V E is the follow-up to Rivers In the Wasteland, which debuted at #3 overall on the Billboard 200 and spawned the RIAA-certified Gold single “Brother (feat. Gavin DeGraw).” The hit earned the group their first GRAMMY nomination as well as a pair of Billboard Music Award nominations.

NEEDTOBREATHE, well known for the aggressive touring schedule and impressive live show, celebrated four consecutive sold-out shows at Red Rocks Amphitheatre, as well as sell outs at Greek Theatre (Los Angeles), Ascend Amphitheatre (Nashville), Aragon Ballroom (Chicago), Verizon Theatre (DFW) and more. Last July, NEEDTOBREATHE released their 4-track EP Forever On Your Side (Niles City Sound Sessions), which includes the single “Forever On Your Side (with JOHNNYSWIM),” and is the product of a 10-day recording session at Niles City Sound in Fort Worth, Texas (the famed location where Leon Bridges’ GRAMMY-nominated debut Coming Home was recorded).

NEEDTOBREATHE released their first-ever fully acoustic album – Acoustic Live Vol. 1 – in November 2018. The album, which was entirely self-recorded, produced and mixed/ mastered, represents over a decade of music from the GRAMMY-nominated band, with songs spanning across five of their six studio albums. For more information, visit needtobreathe.com.

ABOUT ONEWORLD HEALTH
Our vision is to see impoverished communities take ownership in a sustainable healthcare model, so that they become empowered to bring about long-term change and tangible improvements in their health and quality of life. Our mission is to provide quality, affordable healthcare to people in need. We have developed a model that provides affordable health care to the communities who need it most and does not require ongoing support to keep the doors open. Each OneWorld Health medical center offers a full scope of healthcare services to the community, delivered by trained nationals and offered at a price point that is affordable to the overwhelming majority of the population. Patient fees offset the costs of running the clinic, eventually meeting or exceeding the total monthly operating costs. For more information, visit oneworldhealth.com.