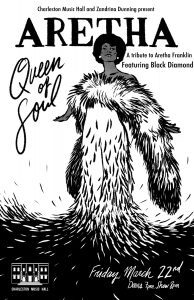 On Friday, March 22nd, Christian “Black Diamond” Smalls and her 10-piece band will pay tribute to the late Ms. Aretha Franklin at the Charleston Music Hall for an evening of nostalgic, soulful melodies that aim to take you on a journey down memory lane. “Queen of Soul: A Tribute to Aretha Franklin,” begins at 8 pm.


Equipped with a rich and soulful voice largely inspired by the “Queen of Soul” herself, this Charleston native began singing at the age of two. She auditioned and was accepted into the Charleston County School of the Arts where she attended from 6th-12th grade. She received technical vocal training during that time and one of her greatest achievements was winning the All-State Vocal Competition that earned her the title of #2 Alto in the State of South Carolina.

Smalls than graduated from Winthrop University and formed a band with some college friends called The Pearls & Funk Band. They performed together successfully for years at several venues in the Charlotte area receiving notable exposure. Shortly after relocating back to Charleston, she became the lead vocalist of The New Image Band.

In 2013, she began her solo career and formed Black Diamond and Company, an eclectic funk and soul band. Smalls has opened for major recording artists like The Average White Band, Tank, Tim Bowman, K Michelle, PJ Morton, and more.

Her band for the Music Hall performance includes: