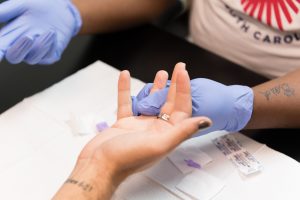 Last year, Palmetto Community Care – which rebranded from Lowcountry AIDS Services – increased its prevention and education services. The nonprofit has expanded its focus on testing, outreach and HIV prevention education to rural areas of Dorchester and Berkeley counties as well as targeted high-risk communities in Charleston County.

Overall in 2018, more than 90 percent of those tested positive for HIV identified as men who have sex with men; 75 percent were under the age of 30; and 56 percent for African American.

In 2018, Palmetto Community Care also added a mobile testing van thanks to a grant from the Elton John AIDS Foundation. The prevention team has taken the van to nightclubs, community centers, health fairs, special events and more. In the roughly six months the van was on the road last year, the Palmetto Community Care team administered 346 tests.

“There is only one way to know whether you are HIV-positive and that is to get tested and know your status. So, seeing more people get tested in 2018 means our education and outreach efforts are working,” said Adam Weaver, prevention program manager. “Yet it also shows that HIV and other sexually-transmitted infections are still a very real problem in our community. In 2019, we will continue our work to educate the community about safer sex practices and the importance of getting tested.”

In 2018, Palmetto Community Care also launched a PrEP program to help combat rising rates of HIV in the greater Charleston community. PrEP is a once daily pill (brand name Truvada) that is up to 99 percent effective in reducing HIV rates for those who take the medication as prescribed. Palmetto Community Care’s goal is to make this program and medication free or low cost for participants. The program started in September and, by the end of the year, 27 people were enrolled.

An estimated 1.1 million people in the United States were living with HIV at the end of 2015. Of those people, about 15 percent, or one in seven, did not know they were infected. In the Lowcountry Public Health Region, the latest data as of  the end of 2016 indicates that at least 4,606 people are living with HIV/AIDS.

Palmetto Community Care offers free, confidential testing for HIV as well as chlamydia, gonorrhea and syphilis at its office located at 3547 Meeting Street Road in North Charleston. Testing hours are 8:30 a.m. to 3:30 p.m. on Mondays, Tuesdays and Thursdays and until 6 p.m. on Wednesdays. No appointment needed. Free condoms are also available.

About Palmetto Community Care | Complete compassionate HIV care + prevention
Palmetto Community Care has been helping those living with HIV for more than 25 years. It all started with a belief that no one living with HIV or AIDS should go without medical care, everyday resources or emotional support. We believe our continued commitment to our work here in the Lowcountry will help bring an end to the HIV epidemic through increased HIV testing, prevention and education. Free, confidential HIV/STI testing: 8:30 a.m. to 3:30 p.m. on Mondays, Tuesdays and Thursdays and until 6 p.m. on Wednesdays. No appointment needed. For more information, visit palmettocommunitycare.org.