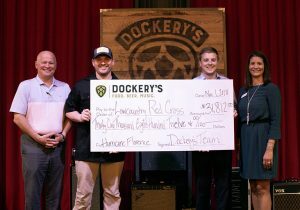 Dockery’s recently announced that it had donated more than $31,000 to the Red Cross for hurricane relief in the Carolinas.

During October, the Daniel Island restaurant and brewery committed to giving ten percent of all purchases and fifty percent of all BLOOM Organic Light Lager six pack sales to the Red Cross to assist those in areas devastated by winds and flooding brought by the Category 4 hurricane.

“Charleston was spared by Florence, but as a city we know what it’s like to be impacted by a hurricane,” Dockery’s General Manager Chuck Isenberg said. “The Daniel Island community really rallied around the idea of giving this month and we were able to assist a neighboring area that was less fortunate that us.”

The total damage by Hurricane Florence is expected to reach $22 billion. At least 48 lives were lost in the storm.

You can donate, volunteer, or sign-up to donate lifesaving blood at redcross.org.