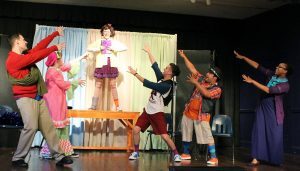 The City of North Charleston’s Cultural Arts Department is pleased to offer a seasonal Children’s Theatre performance at the North Charleston Performing Arts Center from 10 am to 11 am on Thursday, November 29th. Georgia Ensemble Theatre will present Junie B. Jones is Not a Crook, based on the beloved Junie B. Jones book series by Barbara Park. The program is appropriate for grades K-5. Schools, day cares, community groups, families, and individuals are welcome to attend. Tickets are $2 per child with accompanying adults admitted at no charge. Parking is free.

Georgia Ensemble Theatre brings the characters from Barbara Park’s children’s book series to the stage in Junie B. Jones is Not a Crook. The play follows Junie B. Jones, a feisty six-year-old, as she navigates elementary school life. Something terrible has happened to Junie B. at school! Someone stole her new furry mittens! So when she finds a wonderful pen of many colors, she should be allowed to keep it, right? Because finders keepers, losers weepers. And guess what? There’s a new boy in kindergarten and he is the handsomest. The only thing is both Grace and Lucille want him to be their boyfriend. Maybe he will love Junie B. when he sees her wonderful pen! It is okay to keep it, right? Junie B. Jones is not a crook . . . or is she? This hilarious show is sure to capture the hearts of children and adults.

As the resident professional theatre at the Roswell Cultural Arts Center, Georgia Ensemble Theatre (GET) has earned a reputation for the quality and diversity of its plays. Since its first production of Kaufman and Hart’s You Can’t Take It With You in 1993, GET has produced 21 regular seasons of plays and musicals with 141 productions on the main stage and on tour to elementary and middle schools throughout Georgia. Some of the school matinees they have produced include The Miracle Worker, To Kill a Mockingbird, Of Mice and Men, Our Town, Great Expectations, as well as some plays intended for elementary school audiences including The Lion the Witch and the Wardrobe and Stuart Little. More information can be found at www.get.org.

The North Charleston Performing Arts Center is located at 5001 Coliseum Drive, North Charleston, SC 29418. Groups of 10 or more are asked to reserve space in advance. Seats fill up fast, so reserve early by calling the City of North Charleston Cultural Arts Department office at 843.740.5854. For reservation forms, directions, or information on additional programs and events, visit the Arts & Culture section of the city’s website, www.northcharleston.org.