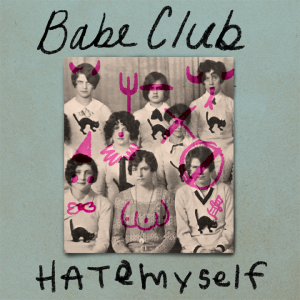 Babe Club, a band from former SUSTO members Jenna Desmond and Corey Campbell, this week released their debut single, “Hate Myself.” You can hear the single below.

The song was self-produced and recorded downtown in the AAA storage units where Wolfgang Zimmerman used to have his studio (the units were closed down last month). The tune also features local musicians like drummer Julius DeAngelis of The High Divers, Ross Bogan on synthesizer, and Camille Rhoden on backing vocals.

“(Our debut single is) a reflection of my life over the past few years,” Desmond said. “I felt pretty isolated after being on the road so long, especially during our current political times. I lost contact with a lot of ladies in my life at first, and felt alone because I had no one to relate to. Hence, ‘I hate myself.’ I think in general when people start working full time, everyone gets busy, and keeping friendships and staying social is really hard sometimes.”
–
“When I started playing in SUSTO, I had just graduated school, and Corey taught me how to play bass so I could join them on the road. It was monumental to me that the guys in SUSTO saw potential in me, and gave me the opportunity to be on the road with them. Corey and I played our last show with SUSTO on September 29th in Columbia. It’s bittersweet to go, but we’re excited to do Babe Club full time.”
The duo will be playing at The Royal American on November 10th with Airpark and Tom Angst.