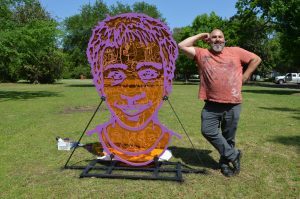 The Charleston Parks Conservancy will celebrate Art in the Parks Week with two events open to the public.
An Art in the Parks Reception will be 6 pm to 8 pm on Tuesday, October 16th at Redux Contemporary Art Center. The public is invited to hear from Georgia-based artist Joseph Dreher (known as JOEKINGATL). In April, Dreher installed four large-scale sculptures in Hampton Park, kicking off the Conservancy’s Art in the Parks program.
The installation – called “Plant Vitae” – is located on the southern edge of Hampton Park along Mary Murray Drive. It represents Charleston residents in a way that celebrates the people and the community. Dreher worked with children from schools near Hampton Park and the local Boys and Girls Club to create the portraits showcased in the final art pieces.
Dreher will talk about his inspiration and the creative process for these works of art as well as his other artwork. One of his sculptures will be on display in front of Redux Contemporary Art Center. This event is free and open to the public. Light food and drinks will be served.
Join the Conservancy for Art in the Parks at Twilight from 6 pm to 8 pm on Thursday, October 18th at Hampton Park. The public can get one final look at Dreher’s sculptures in the park before they are removed. He also will be on hand to answer questions about the pieces and his artistic process.
In addition, live artists will be working during the event, local band Lumberjack Time Traveler will perform, and food will be available for purchase from Blackense Soul Food Hibachi food cart. Admission is free and the event is open to the public.
The Conservancy launched its Art in the Parks program in 2017, an effort to install temporary public art displays in Charleston city parks through collaborations with artists and arts organizations, including Redux Contemporary Art Center, City of Charleston Office of Cultural Affairs and ArtFields. For more information, visit www.charlestonparksconservancy.org.