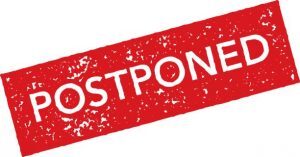 Since the storm is almost here, the majority of businesses are now closed and events are canceled. I will no longer update this page. In the meantime, you can see which businesses decided to stay open here.

The events listed below have been canceled or postponed due to Hurricane Florence. Information is subject to change and is not complete. Let me know of updates: christian@holycitysinner.com