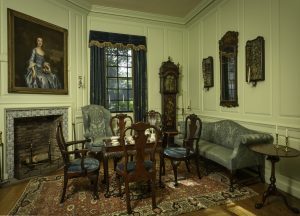 The public is invited to hear J. Thomas Savage, author of The Charleston Interior and Director of Museum Affairs for Winterthur Museum and Country Estates, speak on “Capturing Many Pasts: Henry Francis du Pont and The American Interiors of Winterthur” on Wednesday, September 19th at 6 pm at the historic Trolley Barn (649 Meeting Street).

Savage will be the first of six lecturers in the American College of the Building Arts’ 2018-2019 Mary Scott Guest Lectures: The American South’s Decorative Arts and Material Culture. The lecture is free and open to the public, though a tax-deductible contribution to ACBA’s scholarship fund of any amount is suggested.

Seating is limited and registrations confirmed by September 17th with a donation of $25 or more will be guaranteed seating. Seating thereafter will be on a first-come, first-seated basis. To pre-register, e-mail handall@buildingartscollege.us.

Savage was Director of Museum Affairs at Historic Charleston Foundation from 1981 – 1995. He holds a B.A. in art history from the College of William and Mary and an M.A. in history museum studies from the State University of New York. He furthered his studies in England at the Attingham Summer School on the British Country House, the Victorian Summer School, and the Cambridge Choral Studies Seminar. He also served as Senior Vice President and Director of Southeby’s Institute of Arts for North and South America before joining the Winterthur staff.

Winterthur is the former Delaware home of Henry Francis du Pont. After visiting Winterthur in 1932, the Walpole Society noted that they had been impressed by the many Early American rooms: “Here are rooms that welcome the guest, furniture which seems glad to receive him. There is nothing of the museum in the air. We are not among the dead.”

Du Pont later explained his creation of 175 American rooms at Winterthur as a desire to “show America as it had been.” Intended as evocations of the past by their creator, the rooms at Winterthur are increasingly attracting new audiences and scholarly attention by those interested in 21st century design and taste.

The Mary Scott Guest annual lecture series brings the nation’s foremost thought leaders in the building arts to ACBA, where both students and the public can further their understanding and appreciation of these arts through exposure to top experts in their fields. This year’s series on “The American South’s Decorative Arts and Material Culture” is in concert with the introduction of ACBA’s new undergraduate specialization in Classical Architecture and Design, which is being offered for the first time this year.

Other speakers in this year’s series will include: