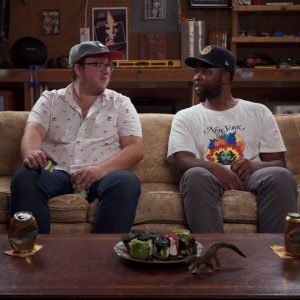 Local comedians Hagan Ragland and Jon Antoine, the trash talking duo that run The Petty Couch Podcast, have released the third episode of their video series, The Petty Couch HD. The video, like the other two in the series, was created in collaboration with Seamless Pictures, a local production company.

According to Ragland, the series features the pair hosting a “low budget talk show that completely falls apart or flies off the rails in some way.” The entire cast and crew is made up of local comedians, actors, and filmmakers. You can watch the episode below (FYI – there is some NSFW language).

To view other episodes, view www.SeamlessPictures.com.