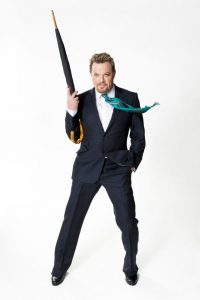 English stand-up comedian Eddie Izzard will bring his new “Eddie Izzard: Believe Me Tour” to the Gaillard Center on October 9th at 8 pm.


The comedian is touring in support of his first book, Believe Me, which was chosen by Bill Gates as one of the “5 Amazing Books I Read This Year.” Released on June 13th, 2017, Believe Me was a New York Times Best Seller. Writing with the same candor and insight evident in his comedy, he reflects on a childhood marked by the loss of his mother, boarding school, and alternative sexuality, as well as a life in comedy, film, politics, running, and philanthropy. You can purchased the book here.

Outside of his stand-up career, Izzard is best known for his roles in Ocean’s Twelve, Ocean’s Thirteen, Mystery Men, Across the Universe, and Valkyrie. He also appeared in TV shows like Hannibal, The Riches, and United States of Tara.

His 2000 comedy special “Dressed to Kill” won a Primetime Emmy Award for Individual Performance in a Variety or Music Program.

Tickets for his Charleston show go on sale Friday, August 3rd. You can get pre-sale access by becoming a Charleston Gaillard Center Member. Contact the venue’s Development Office at development@gaillardcenter.org or (843) 579-6452 for more information.

Izzard last performed in the Charleston area back in December of 2015.