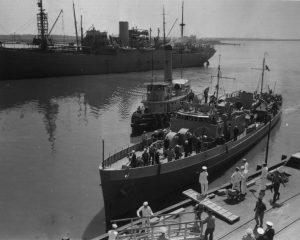 Patriots Point Naval & Maritime Museum will bring attention to some of the remarkable events in the history of the United States Coast Guard’s (USCG) service at war during a free symposium held aboard the USS Yorktown on Friday, August 3rd at 7 pm.

The symposium, entitled “The United States Coast Guard at War” will offer a discussion around key moments in the history of the United States Coast Guard, including the sinking of a German U-boat during World War II off the coast of North Carolina by the USCG Cutter Icarus (right). In addition to sinking the submarine, the Icarus crew captured the survivors and took the 32 prisoners of war to the Charleston Navy Yard for questioning. Other historic events to be discussed range from World War II to the Persian Gulf War.

Dr. William Thiesen, Ph.D., a Coast Guard historian and Chief Petty Officer Joseph Ruggiero will both serve as panelists. CPO Ruggiero was awarded a Bronze Star with a Combat “V” for Valor for his actions while deployed in the Persian Gulf in 2004. He and other crew members of an inflatable patrol boat prevented the potential destruction of an offshore oil terminal by disrupting a suicide bomber who was piloting a boat loaded with explosives. The defense of the oil terminal cost three servicemen their lives when the explosion intended for it was detonated not far from Ruggiero’s boat.  Four others, including Ruggiero, were injured.

“The Coast Guard is responsible for so many roles in the defense of our country,” said Patriots Point Naval & Maritime Museum Executive Director Mac Burdette. “They rarely get the credit they deserve. We hope to share many of their incredible stories of valor with the community as part of our effort to celebrate the 228th birthday of the USS Coast Guard.  These men and women are truly our neighbors.”

National Oceanic and Atmospheric Administration’s (NOAA) Tan Casserly will also serve on the symposium panel. Casserly will discuss what is being done to preserve ships like the USCG Cutter Jackson that sunk in a hurricane just off of the U.S. East Coast during WWII.

The event will include the honoring of the Coast Guard’s only Medal of Honor Recipient, Douglas Munro. Signalman 1st Class Munro was posthumously awarded the medal for his use of Higgins boats to save the lives of hundreds of Marines at the Battle of Guadalcanal during WWII.