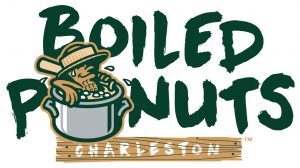 The Charleston RiverDogs are dropping their official team name – for one night only – to pay homage to a local culinary favorite and a ballpark icon when they become the Charleston Boiled Peanuts on Saturday, July 28th at Joe Riley Park.

The change includes specialty jerseys, a logo rebrand, and a pregame peanut festival on the concourse. Along with embracing the Southern staple, the Saturday night game against the Greenville Drive will also pay tribute to Anthony Wright, a.k.a. “Tony the Peanut Man,” a longtime ballpark vendor and fan favorite, who passed away shortly after the 2016 season.

“We knew that if we were going to supplant our long-time namesake for a game, we wanted to choose something that holds significance to our fans…and the ‘Boiled Peanuts’ to us does just that,” RiverDogs President and General Manager Dave Echols said in a release. “We hope this is a night to celebrate a Charleston tradition and continue to pay tribute to Tony and his family.” 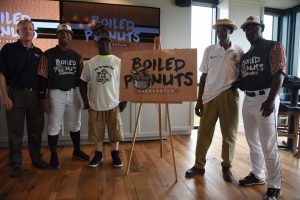 Charleston pays homage to Tony each home game during the seventh-inning stretch when they toss a bag of peanuts into the crowd during “Take Me Out to the Ballgame.” Wright was also the focus of a home contest last season when the Dogs paid tribute on Tony the Peanut Man Night, celebrating the life of a Charleston icon.

The first 1,000 fans at the gates will receive their very own peanut bucket, suitable for tossing aside their boiled peanut shells. Boiled peanuts caps, jerseys, and other merchandise are already available for purchase on the RiverDogs’ online merch store and in-person at the Riley Park team store. A portion of the night’s boiled peanut sale proceeds will go towards the Muscular Dystrophy Association. The Peanut Man, Tony’s superhero alter-ego, will also be on hand to help the Dogs celebrate.

More information can be found at boiledpeanutsbaseball.com.

A staple of Charleston, boiled peanuts trace their roots as a cultural food in the Lowcountry as early as the 19th century. They were declared as the official snack of the state of South Carolina by then Governor Mark Sanford in 2006. Designed by Studio Simon, the Boiled Peanuts logo showcases a laid-back peanut stewing in a boiling pot, complete with Tony’s signature sweetgrass cap.

RiverDogs single-game tickets, including options to the Riley Park Club, are now available for the 2018 campaign, the club’s 25th season as the RiverDogs and their “175thseason in dog years.” Ticket information can be secured by contacting the box office at (843) 577-DOGS (3647) or online at www.riverdogs.com/tickets. 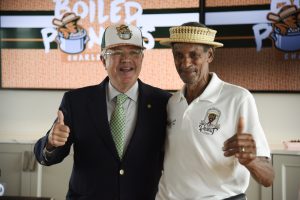 Charleston Baseball Hall of Fame Announces Inductees for Class of 2018