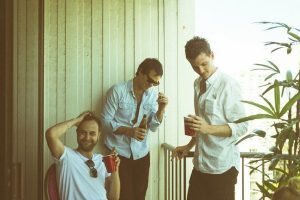 Houndmouth, an indie rock band that has performed in the Charleston area multiple times, will return to the Holy City for a September 1st concert at the Music Hall. The show starts at 8 pm and will close out the venue’s schedule of Charleston Music Confab performances.

The Indiana-based group released their first album (From the Hills Below the City) in 2013, which made them critical darlings. The group earned praise from the likes of Spin, Esquire, Garden & Gun, and The Guardian. They’ve also appeared on TV shows like Letterman and Conan and performed at major festivals like Austin City Limits, Bonnaroo, SXSW, and Lollapalooza.

Houndmouth’s follow-up album, Little Neon Light, was released in 2015, and the record’s first single, “Sedona,” reached No. 1 on Billboard‘s Adult Alternative Songs chart. Their new album, Golden Age, will be released on August 3rd. Three singles, including “This Party” (below), have already been released.

Tickets for the Music Hall show can be purchased here.
–

Follow us
Related Topics:Charleston Music Confabcharleston music hallhoundmouth
Up Next

Extra Chill Fest at The Purple Buffalo on September 8th