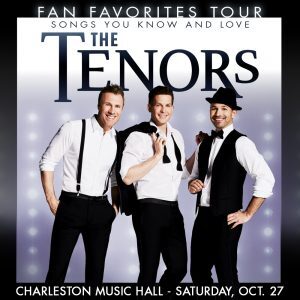 The Charleston Music Hall announced The Tenors: Fan Favorites Tour will be at the venue on Saturday, October 27th at 8 pm.

This fall tour announcement comes on the heels of the trio confirming yet another PBS special which will premiere in August 2018. The Tenors – Fan Favorites is part of special programming premiering on PBS later this summer and will feature the The Tenors in an intimate musical experience. With a selection of timeless hit songs, the show will include a Smokey Robinson/Motown medley, Broadway classics from West Side Story and Jesus Christ Superstar, as well as songs from The Great American Song book that were performed by Sinatra, Neil Diamond, and Roy Orbison. Tickets range from $50.50 to $76 w/ a dinner & show add on available for an additional $32. Tickets on sale Friday, June 29th at 12PM!

Since 2008 The Tenors — Victor Micallef, Clifton Murray, and Fraser Walters — have been thrilling audiences around the world with their powerful songs and outstanding harmonies. Blending classical music and contemporary pop, the award-winning and multi-platinum selling band have achieved international success, showcasing their undeniable charm and diverse vocal styles performing over 700 shows on five continents.

The Canadian vocal super group have performed for the last four presidents of the United States, including at the White House Christmas Tree Lighting for the Obama Family, for world leaders at the G20 Summit in Toronto, at the Music For Mercy Event at the Vatican in Rome, in Vancouver for the opening ceremonies of the XXI Olympic Winter Games, and for Her Majesty The Queen’s Diamond Jubilee and most recently for her 90th birthday celebrations at Windsor Castle.

The Tenors have had the honor of sharing the stage with some of the biggest names in music including Sir Paul McCartney, Sarah McLachlan, Sting, Neil Young, Andrea Bocelli, Elton John, Smokey Robinson, Stevie Wonder, Lionel Richie and David Foster. They have also made over 150 television appearances including “The Oprah Winfrey Show”, with Celine Dion, Primetime Emmy Awards Broadcast, “Christmas at The White House” and the “Christmas Tree Lighting at Rockefeller Centre”.   Their 2018 Holiday Tour will follow this “Fan Favorites” tour and will be announced soon.

Follow us
Related Topics:charleston music hallThe Tenors
Up Next