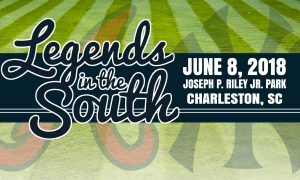 Retired players of two of the most historic franchises in baseball will take the field in the 3rd annual “Legends in the South” alumni baseball game, a Yankees vs. Braves match-up to benefit the Campaign for MUSC Shawn Jenkins Children’s Hospital. The game will take place on Friday, June 8th, at Joseph P. Riley, Jr. Park. The RiverDogs have announced the teams’ rosters, which are headlined by former NLCS MVP Steve Avery and former Yankees catcher and playoff hero Jim Leyrtiz.

Leyrtiz produced an 11-year Major League career that included two World Series championships with the New York Yankees (1996 & 1999). Referred to as “The King,” he accumulated a .264 average with 90 long balls and 387 RBI in 903 career games. He is most famously known for two career postseason walk-off home runs, a 15th inning solo blast in game two of the ALDS over Seattle in ’95 and his game tying two-run shot off Braves closer, Mark Wohlers, in Game 4 of the ’96 World Series. This will be Leyritz’s inaugural appearance in the Legends game.

Avery, the 1991 NLCS MVP, pitched 11 seasons in the Big Leagues, including seven with Atlanta, where he was an integral part of the Braves’ dominant rotation. The third overall pick in the 1988 amateur draft, Avery first broke into The Show at just the age of 20. In his second pro season in 1991, he won 18 games and finished sixth in the Cy Young voting as the Braves clinched their first of 12 consecutive division titles. In the NLCS that season Avery tossed 16 1/3 scoreless innings to be named the series MVP to help the Braves go from “worst to first” and advance to the World Series. He collected a ring with Atlanta in 1995.

General admission tickets for the Legends In The South game start at $12 and can be secured online at www.rileyparkevents.com, at the Riley Park box office, or by contacting the RiverDogs at 843-577-DOGS (3647). Tickets to the Riley Park Club are also available for the game. Fans are encouraged to arrive at 4:00 p.m. for batting practice, and the first pitch is at 6:35 p.m. Post game autographs will take place on the field following the event. Performing the National Anthem and also a short set during autographs will be Nashville star Mary Kutter.

·         Experience a once-in-a lifetime opportunity to experience what it’s like to be a professional ballplayer. Winners will suit up in full uniform, take batting practice on the field, and play in the game. Please note that winners will not have clubhouse access, but will be able to experience the game from the dugout. Braves and Yankees experiences available to the highest bidder. Two auctions available: one to join the Braves team and another with the Yankees.

·         This is a child’s dream come true! The bat boy (or girl) will play a crucial role in keeping the teams’ dugout in order. Some of the duties will include: retrieving foul balls, helmets, bats, and any other gear necessary to and from the dugout when needed, communicating with the umpires, and making sure water is full and cups are stocked! Two auctions available: one to join the Braves team and another with the Yankees.

Registration Open for 19th Annual Race for the ARK