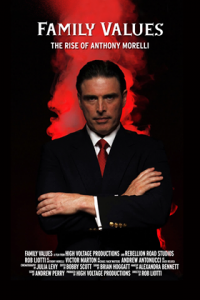 A feature film that was shot in Charleston and written by local actor and musician Rob Liotti recently received domestic and international distribution.

The movie, “Family Values – The Rise of Anthony Morelli,” is already available in the U.S. through Amazon’s Prime Video service, and will soon be made available to an international audience via Punch TV, a new publicly-held network with 27 million subscribers.

The film’s synopsis on Amazon: “A New York crime family heir is moved to Charleston, SC. to keep his nose clean. Anthony Morelli is a slick car dealer who uses his charm and good looks to win the people over, but crime is in his DNA. In order to own it all, Morelli runs for governor.”

Impressively, the film was made with essentially no budget. Liotti says only about $300 was spent for still photography and some minor materials. Despite this fact, the movie has been offered for distribution and licensing. Thus far, Family Values has been picked up in the U.S., U.K., Germany, Spain, and Italy.

You can watch the trailer for the film below, or watch the entire movie on Amazon.
–

Follow us
Related Topics:Family Values - The Rise of Anthony MorellimoviesRob Liotti
Up Next