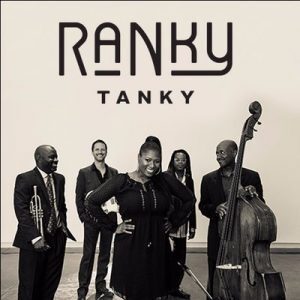 Bluegrass icon Ricky Skaggs was just a child when he first performed with the likes of Bill Monroe and Earl Scruggs. Since then, Skaggs, a Kentucky native, has earned 15 Grammys and multiple International Bluegrass Music Association awards. His quicksilver voice and blistering mandolin technique can be heard on June 1 at the College of Charleston Cistern Yard, when six of the finest pickers—known as Kentucky Thunder—join Skaggs for a one-night-only Festival performance.

The following night, the Cistern Yard provides a homecoming of sorts for the group Ranky Tanky, which makes an exciting Festival debut on Saturday, June 2. Taking its name from the Gullah phrase for “get funky,” Ranky Tanky infuses the music of the Georgia/South Carolina Sea Islands with jazz, gospel, and R&B to create a sound that is at once fresh and irresistible. The band—which includes lead vocalist Quiana Parler, trumpeter/singer Charlton Singleton, bassist Kevin Hamilton, guitarist/singer Clay Ross, and percussionists Quentin Baxter and Calvin Baxter—formed in 2016 and has been gaining steady notoriety for its ability to “take tunes from yesterday and make them sound as lively and relevant as 21st-century electronic beats” (Downbeat). The band released its first album in September 2017. On Friday, June 1, members of Ranky Tanky join music critic Larry Blumenfeld for the Jazz Talk: Mining the Gullah Groove (see Artist Talks).

For 42 years, Spoleto Festival USA has upheld its commitment to providing high-level opportunities for young performers as well as unique performance experiences for established artists. This mission is especially apparent in the Festival’s 2018 music programming, which features the rising talents of the Spoleto Festival USA Orchestra and Westminster Choir as well as creative concerts as part of the Bank of America Chamber Music and Music in Time series.

For a singular orchestral event, filmmaker Atom Egoyan, who is perhaps best known for his 1997 film The Sweet Hereafter and remembered by Festival audiences for his direction of Feng Yi Ting in 2012, returns to Charleston for the production of You Are Mine Own. Creating an impassioned love story from Alexander von Zemlinsky’s Lyric Symphony and Alban Berg’s Lyric Suite, Egoyan provides the stage direction for a musical experience that transcends convention. Festival Resident Conductor and Director of Orchestral Activities John Kennedy leads the Spoleto Festival USA Orchestra, while soprano Natalia Pavlova (who starred in the Festival’s 2017 production of Eugene Onegin) and baritone Alexander Dobson animate Tagore’s lush poetry heard in Zemlinsky’s work. Taking place June 2 at the Charleston Gaillard Center, You Are Mine Own is co-produced by Spoleto Festival USA and Luminato Festival and is sung in German with English supertitles.

Renowned for its “precision, unanimity and power” (The New York Times), the Westminster Choir, under the direction of Joe Miller, gives three solo concerts during the 2018 season. On May 26 and June 1, the ensemble fills the Cathedral Church of St. Luke and St. Paul in a program that includes Frank Martin’s dynamic Mass for Double Choir. On May 29, the choir’s sopranos and altos present a concert of Pergolesi’s Stabat Mater and Holst’s Choral Hymns from the Rig Veda. Sung by candlelight in the sanctuary of St. Matthew’s Lutheran Church, the chamber pieces seek to bring a woman’s perspective to the spiritual world.

Former Festival Music Director Steven Sloane conducts the Spoleto Festival USA Orchestra for its final showcase on June 9 at the Charleston Gaillard Center. The evening of Mozart and Mahler includes Mozart’s Piano Concerto no. 15 in B-flat Major and Mahler’s first symphony, “The Titan.” Joining the orchestra for Mozart’s concerto is pianist Pedja Muzijevic, whose expertise can also be heard this season during the Bank of America Chamber Music series.

Long considered the backbone of the Festival, Bank of America Chamber Music returns to the Dock Street Theatre for 11 programs, each performed three times. In his ninth season as director and host, violinist Geoff Nuttall, The Charles E. and Andrea L. Volpe Director of Chamber Music, curates each eclectic concert, often combining contemporary compositions with hidden old-world gems. Returning to the series in 2018 is countertenor Anthony Roth Costanzo (who starred in the Festival’s US premiere of Farnace in 2017), violinist Livia Sohn, violist Meena Bhasin, cellist Joshua Roman, and pianists Inon Barnatan and Pedja Muzijevic, among others. Joining these Festival favorites are Peter Moore, the London Symphony Orchestra’s co-principal trombonist; tenor Paul Groves of the Metropolitan Opera; and the JACK Quartet, a Brooklyn-based string ensemble specializing in 21st-century compositions. Together with the St. Lawrence String Quartet (the Arthur and Holly Magill Quartet in Residence), the JACK Quartet debuts an octet by composer-in-residence Doug Balliett. More Bank of America Chamber Music details, including a full concert schedule, will be available in April.

Again in 2018, Festival Director of Orchestral Activities John Kennedy hosts the fascinating Music in Time series, an exploration of new sounds in music. In three unique programs held at the Woolfe Street Playhouse (and presented as part of the American Express Woolfe Street Series on May 28, May 30, and June 4), Kennedy asks audience members to open their minds and their ears as he introduces a wide range of compositions. This season highlights the works of international female composers, including Australian Liza Lim, Canadian Zosha Di Castri, New Zealand’s Annea Lockwood, Iceland’s Anna Thorvaldsdottir, and Ireland’s Jennifer Walshe, among others. The programs also feature soprano Marisol Montalvo, who appears in the Festival’s opera, Tree of Codes; soprano Nina Guo and bassist Edward Kass of Departure Duo; and members of the Spoleto Festival USA Orchestra.

The full 2018 program and an event calendar can be found here.

Tickets can be purchased by phone at 843-579-3100 and online at spoletousa.org. Tickets can also be purchased in person through the Spoleto Festival USA Box Office at the Gaillard Center (95 Calhoun Street) beginning on Monday, May 1st.

Creekside Comedy Night with DS Sanders on May 19th