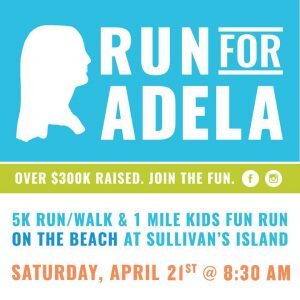 Runners and walkers are invited to participate in the 9th Annual Run for Adela 5K/Walk on Saturday, April 21st at 8:30 am. The event takes place on the beach in Sullivan’s Island.

The race was established in 2010 in memory of Adela Holmes Cook, a young Charleston native who passed away in 2009 from injuries sustained in a golf cart accident while vacationing in the Bahamas. The Run for Adela 5K is symbolic of her passion for spending time outdoors in her cherished  hometown.

Proceeds from this year’s run will fund a scholarship in Adela’s name for a child from Meeting Street Academy to attend Charleston Day School for grades 6 – 8.

In addition, race proceeds support Camp Happy Days with Adela’s Extreme Teen Weekend, an event that serves teens who have been newly diagnosed with cancer and other teens battling cancer.

The race will start and finish at Station 16. Prizes will include bicycles, a weekend getaway at Wild Dunes Resort, and gift certificates to restaurants, spas, shops and other local businesses.

In the last 8 years, over $350,000 has been raised at this event through community sponsorship and involvement. At the 2017 race there were just over 700 participants including comedian and television host Stephen Colbert.