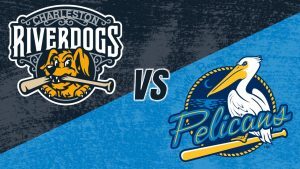 Before casting off on a weeklong road trip to start the season, the Charleston RiverDogs will take the field for the first time in 2018 as they face the Myrtle Beach Pelicans in the Third Annual “Battle of the Beaches” on Tuesday night at 7:05 pm at Riley Park.

Charleston fans will have their first chance to see the RiverDogs together in 2018 as first-year skipper Julio Mosquera’s squad tries to avenge a 2016 loss to the Advanced-A affiliate of the Cubs, who handed the RiverDogs a 2-0 loss at The Joe. Last year’s second annual event was cancelled due to rain at TicketReturn.com Field.

A portion of the night’s proceeds will benefit the Campaign for the Shawn Jenkins MUSC Children’s Hospital with chances to donate offered throughout the night including donation jars at the concession stands and “text to give” options. Gates open at 6 p.m.

Dominican right-hander Daniel Ramos will toe the rubber for the RiverDogs in the unofficial start to the season and will be opposed by Cubs No. 5 prospect Alex Lange, a former first-rounder out of LSU.

Tickets are available at riverdogs.com/tickets. Game notes for the matchup are attached.

RiverDogs single-game tickets, including options to the Riley Park Club, are now available for the 2018 campaign, the club’s 25th season as the RiverDogs and their “175th season in dog years.” The RiverDogs start the regular season on the road starting in Lexington on Thursday night, before returning to Riley Park for Opening Night on April 12 against Kannapolis. Ticket information can be secured by contacting the box office at (843) 577-DOGS (3647) or online at www.riverdogs.com/tickets.