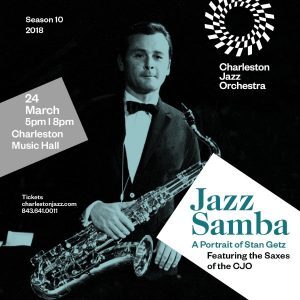 
A winner of five Grammy Awards, Stan Getz was one of the most celebrated saxophonists of all time. Coming into prominence in the late 1940s with Woody Herman’s Big Band, he excelled at be-bop, cool jazz, and early fusion and his influence continues to be seen and heard throughout the jazz community worldwide.

“Stan Getz is always in the conversation of ‘greatest saxophonists,’ said Charlton Singleton, Music Director and Band Leader of the Charleston Jazz Orchestra. “His mastery of Swing and Latin styles of Jazz is second to none. We’re ecstatic to showcase our CJO saxophonists’ mastery of these styles and their homage to one of the all time jazz greats.”

The five saxophonists of the Charleston Jazz Orchestra include Robert Lewis, Mark Sterbank, Jon Phillips, Jack Pettit and Jonathan Kammer. “Stan Getz is an extraordinary creator of melodies,” said Robert Lewis, Artistic Director at Charleston Jazz and lead saxophonist with the Charleston Jazz Orchestra. “We’re looking forward to showcasing all aspects of Stan Getz’s career, ranging from his days with Woody Herman’s big band, to the bebop era, to his work in popularizing bossa nova in America, to the innovative fusion phase with Chick Corea.”Songs to be featured include the dreamy, nostalgic tune that made Getz a household name, Girl from Ipanema, as well as Quiet Nights of Quiet Stars, Four Brothers and Early Autumn to name a few.Tickets are on sale now through the Charleston Jazz website at www.charlestonjazz.com.  Or call the box office at 843-641-0011.  Ticket prices range from $25 to $60 for adults and $10 for students and children.

This concert is the 2nd in a 6-concert series for 2018.  Other upcoming Season 10 concerts include:

About the Charleston Jazz Orchestra:

The Charleston Jazz Orchestra (CJO) is an 18-person big band led by Music Director, Charlton Singleton. The band is comprised of the crème de la crème of South Carolina jazz musicians and is an entertaining, educational and stellar example of the rich history and legacy of jazz in Charleston.  The CJO is in its 10th year offering a 6-concert subscription series and is known for its unique, enthusiastically received performances that contribute mightily to the ever-evolving Lowcountry arts scene.