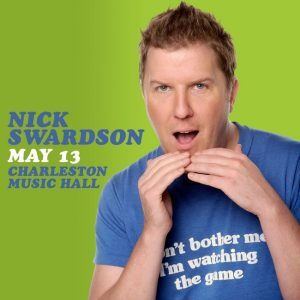 Comedian Nick Swardson brings his Too Many Smells Tour to the Charleston Music Hall on Sunday, May 13th at 7:30 pm.

Swardson can do it all – besides being a comedian, he is also an actor, writer, and producer. He first found success by writing Malibu’s Most Wanted for Warner Brothers and by featuring in the hit Comedy Central series RENO 911. After catching the attention of Happy Madison Productions, he quickly became a fixture in the company, writing or co-writing and producing such projects as Grandma’s Boy, Benchwarmers and co-producing I Now Pronounce You Chuck and Larry with Adam Sandler and Kevin James. More recently Nick has performed in movies such as That’s My Boy, Blades of Glory, 30 Minutes or Less, and Bucky Larson: Born to Be a Star, which he wrote, starred in, and produced. His first CD/DVD, Party, went platinum.

Tickets for his Charleston show are $39.50 with a dinner & show add on available for an additional $32. Public on-sale begins this Friday, March 2nd at 10AM!
–

Follow us
Related Topics:charleston music hallnick swardson
Up Next

Charleston Pho and Wine Brunch at Mercantile this Sunday