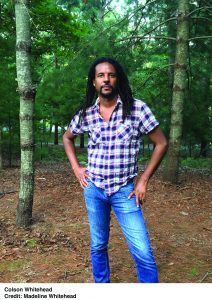 On Monday, March 19th, Pulitzer Prize winning author Colson Whitehead will speak at the Charleston Music Hall as part of “The Paperback Tour” for The Underground Railroad. The event is organized by The Charleston Library Society as part of their annual Speaker Series.

In 2016, The Underground Railroad won the National Book Award and the Pulitzer Price for fiction and was named one of the “Ten Best Books of the Year” by The New York Times Book Review. It traces the story of Cora, a slave on the Randall Plantation in the deep South, who has been beaten and brutalized. She escapes slavery and sets out on the Underground Railroad – almost a character in and of itself – a literal network of railways and tunnels running throughout Antebellum America in search of freedom. Her journey, though, is as hard fought as her life, and Whitehead’s mix of mythology and reality creates a profound, emotional reading experience.

While touring in support of The Underground Railroad’s paperback release, Whitehead will stop in cities across the country, including Charleston. “We are thrilled to host Mr. Whitehead,” says Charleston Library Society Executive Director Anne Cleveland. “The response from our Book Club’s discussion of The Underground Railroad was thought-provoking and memorable. To host him Charleston, with its deep Southern history described in his novel, will make for a very special night.”

Every ticket sold is accompanied by a signed paperback edition of The Underground Railroad. Tickets are available only through the Charleston Music Hall. To purchase tickets, call 843-853-2252 or visit www.charlestonmusichall.com.

Edmund’s Oast Entities Hosting a Variety of Events Next Week