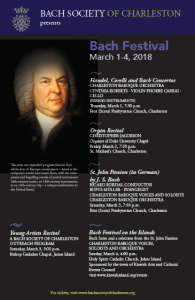 Now in its third season, The Bach Society of Charleston will present a splendid selection of music by baroque masters during its annual Bach Festival, March 1-4, 2018. The Bach Society’s Artistic Director and Conductor, Charleston’s Ricard Bordas, has assembled outstanding baroque musicians to perform works by J. S. Bach, Handel, and Corelli on period instruments in four venues.

The Festival’s centerpiece is Bach’s “vividly dramatic” St. John Passion at 7:00 PM on Saturday, March 3, at First (Scots) Presbyterian Church. Conducted by Ricard Bordas, it will be presented in German by the Charleston Baroque Voices ensemble and eight soloists. The part of the Evangelist will be sung by renowned tenor Rufus Müller, whom the New York Times called “sensational” in this role. The vocalists will be joined by an orchestra of 16 period instruments led by acclaimed musicians Cynthia Roberts (violin) and Phoebe Carrai (cello).

The same musicians will reprise selections from the St. John Passion as well as perform Bach’s popular Brandenburg Concerto No. 4 at 4:00 PM on Sunday, March 4, at Holy Spirit Catholic Church on Johns Island. Entitled “Bach Festival on the Islands,” the final event of the Festival will be sponsored by the Town of Kiawah Arts and Cultural Events Council in its first collaboration with Charleston’s Bach Society.

The Charleston Baroque Orchestra will launch the 2018 Bach Festival at 7:30 PM on Thursday, March 1, with an all-instrumental concert at First (Scots). Local Bach devotees remember Cynthia Roberts and Phoebe Carrai, two of the premier baroque instrumentalists in the country, for their compelling presentations during the 2016 Festival. On this occasion, their focus will be concertos by Handel, Corelli, and Bach.

At 7:30 PM on Friday, March 2, the Festival’s second evening, Christopher Jacobson, Duke University Chapel Organist and Organist at Duke Divinity School, will present a recital of baroque music at St. Michael’s Church in downtown Charleston. Jacobson, a Fellow of the Royal College of Organists who has performed all of Bach’s 257 organ works, will show off St. Michael’s glorious organ to its finest. The instrument itself, built in 1994 by Irish organ builder Kenneth Jones in the style of the great German baroque organs, is housed in the elegant case built in London in 1767.

The Second Annual Young Artists Recital, sponsored by the Bach Society of Charleston, will be held at 3:00 PM on Saturday, March 3, at Bishop Gadsden Chapel on James Island. This auditioned recital recognizes outstanding pre-college musicians and encourages study of the music of Bach and his contemporaries.

Tickets to the Festival concerts on March 1, 2, and 3 are $25 each ($10 for students). A three-night pass is available for $60. Tickets to the March 4 concert at Holy Spirit Catholic Church are complimentary and will be available to the public beginning on February 16 at  https://www.kiawahisland.org/socialevents/bach-society-charleston/.

More information is available at http://www.bachsocietyofcharleston.org .

Bach Festival on the Islands: Bach Brandenburg Concerto No. 4 & Selections from the St. John Passion

Sponsored by the Town of Kiawah Arts and Cultural Events Council

Follow us
Related Topics:Bach FestivalThe Bach Society of Charleston
Up Next

Charleston Moves Together For Parkinson’s Disease