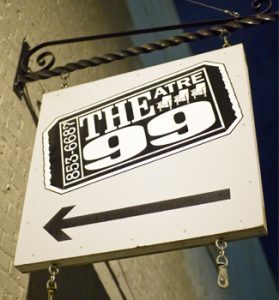 The dynamic duo of rapper BLKPAPA (Jordan Scott Edwards) and his trusty DJ White Smoke (Joshua Christian) are returning to Theatre 99 with “Mystery Meat: The Mixtape Vol. 1.” The hour-long hip-hop and sketch comedy extravaganza makes its triumphant return on Friday, March 9 at 10 p.m.

“The first run of the show was received extremely well,” says Edwards. “We love rap music and we love ridiculous comedy. That love is fully displayed in our songs and sketches, and it’s resonated with our audience more than we hoped for.”

Mystery Meat is half rap concert, half sketch comedy show. Edwards is a huge professional wrestling fan, as evidenced by one of his characters, Rick “The Dick” De Santa, and he strives to bring the same energy you’d find in an episode of Monday Night RAW to the show.

“Seeing wrestling live is amazing. You’ve got adrenaline pumping through your veins the entire time,” says Edwards. “But instead of hitting you with bodyslams, we’re hitting you with outlandish characters and rhymes that’ll make your head spin.”

The show’s setlist includes songs like “Drown,” a parody of Kendrick Lamar’s “Swimming Pools,” and “Customer Service,” a tale of the horrors of working in a call center. Characters showcased include Lowcountry food connoisseur Carolina Carl Calhoun and prayer request angel Monté Carlos.

Charleston improviser and writer Andy Livengood is looking forward to his next helping of “Mystery Meat,” and he appreciates Edwards and Christian’s brand of comedy.

“Mystery Meat is a must see. Absurd characters, insane scenes, and masterfully done hip-hop; there’s something for everyone,” says Livengood. “After seeing it, I was sure of two things; Jordan is a madman, and he should drop a mixtape immediately!”