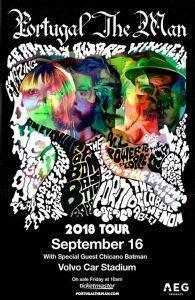 On Sunday, September 16th, recent Grammy winners Portugal. The Man will perform at the Volvo Car Stadium on Daniel Island. The group will be joined on stage by Chicano Batman. The show starts at 7:30 pm.


Portugal. The Man is an Alaskan-grown pop rock band that is known for their recent hit single “Feel It Still.” The song, from the 2017 Woodstock, won a Grammy award for best pop duo/group performance at this year’s Grammy Awards.

During their career, the band has released eight full-length albums featuring hit singles like “Purple, Yellow, Red and Blue,” “Modern Jesus,” “People Say,” and “Live in the Moment.”

Tickets for their show go on sale Friday, February 9th at 10 am. Click here for more information.

The band last played in Charleston back in April 2017.
–