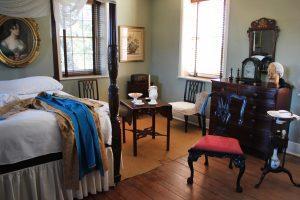 In recognition of Black History Month, tours of the Middleton Place House Museum during February will include a new presentation in the house’s Summer Bedroom that will show visitors the duties of enslaved house servants and their interactions with members of the Middleton family.

The following is a press release from Middleton Place regarding the exhibit:

This year, for the first time during Black History Month, a fascinating special exhibit has been mounted in the second-floor Summer Bedroom of the Middleton Place House Museum. Normally staged as it might have looked late in the day in anticipation of the master’s retirement for the evening, during February it will appear much as it might have during the early morning hours after the master awakened – bed unmade, clothing scattered about, toiletries laid out and letters or books strewn open.

The room, in short, will look lived-in – frozen in time. It will be a stage set for interpretation of the complex relationship between master and slave. It will promote a better understanding of slavery and the role that enslaved house servants played in maintaining the master’s lifestyle, as well as illustrate some of the daily routines of enslaved people within the owner’s household.
In their interpretation, tour guides will be able to name the people who would have been in the owner’s bedroom – perhaps Stephen, the barber; or Caesar, Henry Middleton’s Waiting Man (valet); or Polly, a seamstress; or Flora, a laundress. In telling their stories or stories like theirs, Middleton Place’s overall historical narrative is advanced.

Other examples of how Middleton Place interprets slavery include a permanent exhibit in Eliza’s House, a freedman’s dwelling, as well as a tour entitled Beyond the Fields – Slavery at Middleton Place that brings to the forefront the lives led and the contributions made by enslaved people on the plantation.

The mission of the Middleton Place Foundation, a public non-profit educational trust, is to sustain the highest levels of preservation and interpretation for the Middleton Place National Historic Landmark, its Gardens, House, Plantation Stableyards and affiliated properties, such as the Edmondston-Alston House, and their collections and programs. Middleton Place and the Middleton Place Restaurant are located at 4300 Ashley River Road, Charleston, SC 29414. www.middletonplace.org.

Follow us
Related Topics:black history monthmiddleton place
Up Next

Charleston RiverDogs Partner with Palmetto Goodwill for “Jobs at The Joe Hire Me!” Events