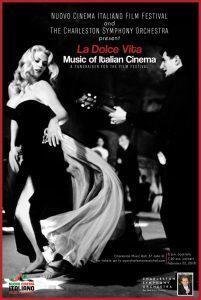 As part of its expansion efforts and promotion of all things Italy, Meridiana fly Airlines has donated two round-trip economy class passenger tickets to the Nuovo Cinema Italiano Film Festival, which will place the tickets up for live auction at the upcoming fundraiser at The Charleston Music Hall on February 22, 2108. The lucky auction winners will travel on Meridiana from JFK to Milan, or connect onwards to Rome, Naples or Palermo!

Meridiana fly Airlines, also known as Air Italy, has teamed up with Charleston’s NCIFF to participate in “La Dolce Vita: Music of Italian Cinema,” a special evening of Italian music and film made possible by a collaboration, between the Nuovo Cinema Italiano Film Festival and the Charleston Symphony Orchestra, with support from the Charleston Music Hall.

Meridiana, a major international airline based in Sardinia, Italy and operating since 1954, has offered flights from JFK International Airport in New York to Naples and Palermo for more than ten years. Meridiana announced in December, however, that it is greatly increasing its flight operations to/from the United States, and in June will start offering non-stop flights from JFK and Miami to Milan, connecting to over 60 worldwide destinations. The U.S. routes will be serviced by modern Airbus A330 aircraft.

On the night of the event, doors will open at 6:00 p.m. for a movie-ready cocktail party featuring fine Italian wine and Prosecco and live Italian music. A silent auction will be held throughout the evening. The concert begins at 7:30 p.m. and features Charleston Symphony Orchestra Principal Pops Conductor Yuriy Bekker on the rostrum. The orchestra will perform music from famous Italian films as scenes from those movies are shown on a screen above the stage. Famed Neapolitan film editor Mario Crocetta prepared the clips for this special night of music and cinema.

Giovanna De Luca, the Film Festival’s Artistic Director and Director of Italian Studies at the College of Charleston, says “I am so excited by Meridiana’s participation in our Festival, which started 12 years ago and has grown by leaps and bounds over the last several years. I am a native of Naples and have flown Meridiana many times in order to return home and visit my family. And flying an Italian airline means that your trip to Italy starts when you step aboard Merdiana’s modern aircraft in New York! Buon viaggio to the lucky winners at the auction!”

Tickets for “La Dolce Vita” are already on sale at charlestonmusichall.com.

Nuovo Cinema Italiano Film Festival, now in its 12th year, brings the best of contemporary Italian cinema and award-winning Italian filmmakers, actors and screenwriters to Charleston, South Carolina for a four-day showcase of great cinema, accompanied by panel discussions, after parties and other special events. This annual event is one of the largest celebrations of Italian culture in the Southeast.

Founded in 1936, the Charleston Symphony Orchestra (CSO) is a cornerstone of the arts and cultural scene of Charleston, South Carolina, providing high-quality performances of symphonic, Pops, and chamber music, as well as inspiring education and outreach programs. The Orchestra employs 24 full-time professional musicians. The CSO performs throughout the tri-county region, and at the newly renovated Gaillard Center. The CSO’s major concert series are the Masterworks, Pops, and Chamber Music. Programming is extensive and varied, spanning multiple periods and genres. In addition, CSO participates in community concerts, special events, and school programs throughout the state. Visit www.charlestonsymphony.org for more information.

Follow us
Related Topics:Nuovo Cinema Italiano Film Festival
Up Next