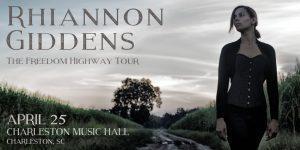 The Charleston Music Hall will welcome back singer and mulit-instrumentalist Rhiannon Giddens on Wednesday, April 25th at 8 pm.

Giddens’ recent televised performances include The Late Show, Austin City Limits, Later…with Jools Holland, and both CBS Saturday and Sunday Morning, among numerous other notable media appearances. She performed for President Obama and the First Lady on a “White House Tribute to Gospel,” which was televised on PBS.

In addition, Giddens received the BBC Radio 2 Folk Award for Singer of the Year and won the Steve Martin Prize for Excellence in Bluegrass and Banjo in 2016.

Tickets for her Charleston show range from $29.50 to $39.50 with a dinner & show option available for an additional $32. Public on-sale begins this Friday, February 2nd at 10 am. Giddens last played at the Music Hall in 2015.

Follow us
Related Topics:charleston music hallRhiannon Giddens
Up Next