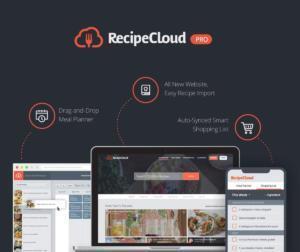 Over the past four-and-a-half years, thousands of home cooks and professional chefs have discovered RecipeCloud, the social cookbook app that makes it simple to discover, store, organize, and socially share your favorite recipes. Now, RecipeCloud is significantly expanding its offerings with the release of a complementary web app featuring robust new capabilities that allow users to do all of their recipe management, meal planning, and grocery planning in one centralized, cloud-based location—accessible from anywhere, on any device.
With the release of the web app and updated features, RecipeCloud is now a complete recipe management service that does much more than simply allowing users to find, save, edit, organize, and share recipe collections. The web app and updated iOS release now allow users to:
“RecipeCloud has already established itself as the go-to app for finding, collecting, and sharing recipes online,” said co-founder Trent Cox. “With the release of our web app and updated features, we intend for RecipeCloud to become more than just a social cookbook. It is now an all-in-one recipe management and meal-planning system—it’s everything you need to dream up, plan, and execute meals.”
Users can access RecipeCloud for free with a LITE account or, for the full suite of features, create a PRO account for just $14.99 per year. For more information, visit recipecloudapp.com.
–
The following is an unedited press release