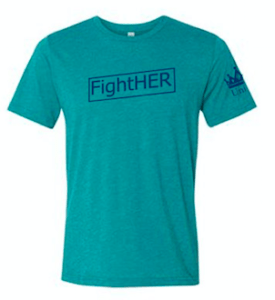 As many Americans are celebrating Breast Cancer Awareness Month, one local woman decided to create her own FightHER t-shirt fundraiser to honor the memory of her late mother, Cheryl Hardy.
Every October, Shannon Phelps participates in events and fundraisers to support the cause, but this year she had an idea to lead her own effort.
“As I was thinking about Breast Cancer Awareness Month this year, I wanted to add my own special touch to honor my mother and all of those who have been affected by the disease,” Phelps said. “I love being creative and I love fashion so it was a natural fit for me to create a t-shirt. We hope FightHER is a message many women can relate to as they fight breast cancer or support a loved one.”
A variety of FightHER t-shirts and tank tops are available through the College Hill website. Tank tops are $25 and available in navy, raspberry, and white. T-shirts are $30 and available in black and teal. All proceeds will go to the Hollings Cancer Center at the Medical University of South Carolina.
When Phelps’ was a junior in high school, her mother was diagnosed with stage 4 in-situ carcinoma breast cancer in 2005. Though she was put into remission after a round of chemotherapy, the cancer came back two years later as stage four mesothelioma, which is the most aggressive form of breast cancer. It had spread to Hardy’s liver, lymph nodes, and brain. She passed away shortly after.  She left behind her husband Henry Hardy, and daughters Shannon and Olivia, who were both teenagers at the time.