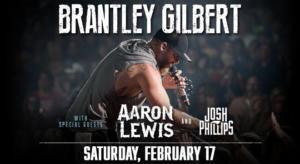 Country singer-songwriter Brantley Gilbert will bring his “The Ones That Like Me 2018” Tour to the North Charleston Coliseum on Saturday, February 17th. Tickets go on sale Friday, October 20th at 10 am.

Gilbert’s last two albums, 2014’s Just As I Am and this year’s The Devil Don’t Sleep, both reached #1 on the Billboard Country charts. The former went platinum and won the 2014 American Music Award for Favorite Country Album. The Georgia native’s most popular songs include “Bottoms Up,” “Country Must Be Country Wide,” and “You Don’t Know Her Like I Do.”

Tickets will be available at the North Charleston Coliseum Advance Ticket Office, online at Ticketmaster.com, or charge-by-phone at 1-800-745-3000.

Dusty Slay and Friends Perform at Theatre 99 on December 15th