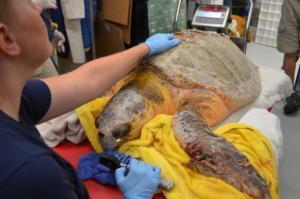 The South Carolina Aquarium Sea Turtle Care Center will release four sea turtles at Isle of Palms County Park on Tuesday, October 3rd at 3 pm. This will be the final public sea turtle release of the year.

As usual, the public is invited to attend the event. Although viewing the release is free, attendees may have to pay for parking. The Aquarium will also broadcast the event on Facebook Live.

According to SCDNR, during the past 10 years, the average number of sea turtle strandings on South Carolina beaches each year is 128. Of these, roughly 10 percent are alive and successfully transported to the Sea Turtle Hospital. To date, the South Carolina Aquarium has successfully rehabilitated and released 236 sea turtles and currently has 12 patients in its care.