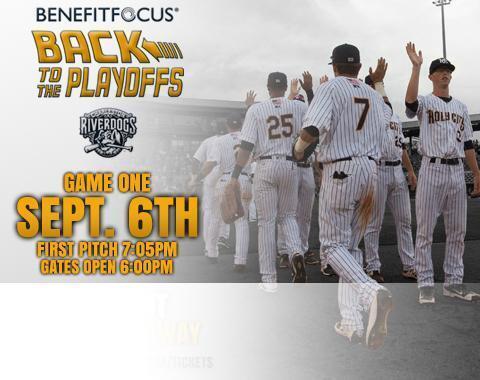 Playoff baseball is on the horizon as the first-place RiverDogs eye their second straight postseason appearance with less than two weeks remaining in the regular season. Secure your spot for playoffs in the Holy City as the RiverDogs get set to host game one of the South Atlantic League Divisional Round on Wednesday, September 6th with tickets now available.

With a second-half title, the RiverDogs will host Game One against the Greenville Drive on September 6th at 7:05 pm before Charleston heads to Fluor Field to close out the best-of-three series.

All fans in attendance will receive a RiverDogs playoff t-shirt at the gate as part of a playoff “White Out” as Charleston tries to open the series with a big win at home.

Single-game tickets start at $8 for general admission along with $10 for grandstand level seats, $18 for field view, and $20 for diamond view. Four-game playoff strips are also available for purchase that includes a ticket to the first-round match-up on September 6th, along with seats to all three potential dates the RiverDogs can host for the SAL Championship series in games 3-5 (September 14th, 15th, 16th).

All season-ticket holders that renew their tickets for 2018 by September 1st will receive a ticket to the September 6th game against Greenville.

The RiverDogs’ magic number currently stands at nine with 13 games remaining. Charleston needs a combination of RiverDogs wins and losses by the Rome Braves to mark their second straight appearance in the playoffs.

After a six-game road trip in West Virginia and Delmarva, the club will wrap up the 2017 home slate with a three-game homestand at The Joe against Hickory from August 29-31, wrapping up the regular season at The Joe with a bang as part of a postgame Fan Appreciation Night fireworks show in the home finale.

RiverDogs tickets, including options for the all-new Riley Park Club, are now available and can be secured by contacting the box office at (843) 577-DOGS (3647) or online at riverdogs.com/tickets.