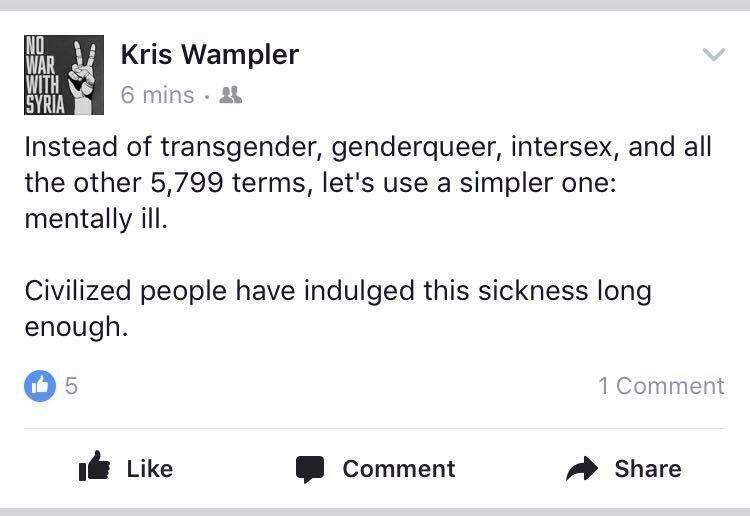 A Republican nominee for South Carolina’s Fifth U.S. Congressional District is facing some backlash after comments he made on Facebook.

On Wednesday, Kris Wampler, of Indian Land, SC, posted the following to his personal Facebook page:

“Instead of transgender, genderqueer, intersex, and all the other 5,799 terms, let’s use a simpler one: mentally ill.

A screen capture of the post can be seen on the right.

A few people expressed their displeasure over the comments by tweeting to Wampler. You can see some of those tweets below.

Wampler is running to replace U.S. Rep. Mick Mulvaney’s Fifth District seat. A special election for the seat was announced after Mulvaney was confirmed as director of the Office of Management and Budget.

@KrisWampler what is wrong with you? Sexual orientation/identity isn’t a mental illness just because you don’t agree with it. Repulsive

Voters need to know if other Republican candidates in #SC5 agree with @KrisWampler. This is what hate looks like. #flipthe5th pic.twitter.com/jZNYrN4iOQ

I bet @SCEquality has something to say about this. I’ll start: @KrisWampler is disgusting. https://t.co/9kX3nqec4Z

@scdp @KrisWampler That type of hatred disgusts and dismays me.