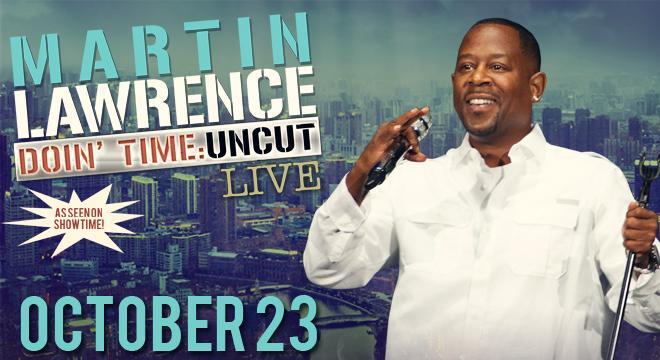 UPDATE: 10/14/16 – The venue released this statement from the comedian: “Martin Lawrence’s DOIN’ TIME: UNCUT LIVE show at the North Charleston Performing Arts Center on October 23 will need to be cancelled.  Hurricane Matthew’s impact on the Charleston area is absolutely devastating.  Matthew was the most powerful storm to hit the U.S. Atlantic coast in more than a decade, causing President Barack Obama to sign an emergency declaration for the Carolinas and Florida.  South Carolina is still suffering from rising flood waters and widespread power outages, with an estimated 300,000 customers across the state still without power.  Due to scheduling conflicts, Martin is unable to reschedule the event.

Refunds for ticket sales will begin Wednesday, October 19 at point of purchase.  Ticketmaster phone charges and online sales will automatically be credited to customer’s accounts.  Fans that purchased via the North Charleston Performing Arts Center Ticket Office should call (843) 529-5000 x5113 to process their refunds.  The Ticket Office is open Monday through Friday from 10:00am-5:00pm.

We apologize for any inconvenience.


Lawrence, who is doing a stand-up tour for the first time in four years, first rose to prominence when he hosted the groundbreaking comedy series Def Comedy Jam on HBO. From there, he became a household name thanks to his hugely popular TV show, Martin, which aired for five years.

Lawrence would later go on to star in comedy blockbusters like Bad Boys, Bad Boys II, A Thin Line Between Love and Hate, and the Big Momma’s House franchise.


Tickets for his North Charleston show go on sale this Friday.

The 7th Annual Avondale 5K Run + Walk is Next Month