Brace yourselves, Charleston – Holy City Sinner (HCS) has confirmed that Bravo’s Southern Charm will return for a fourth season.


After hearing that members of the show’s cast were being filmed last Wednesday at Spring Street bar Warehouse, HCS reached out to a source close to the reality program for more details. Speaking on the condition of anonymity, the source confirmed that filming for the fourth season had begun (Update – 9/14/16: This has now been confirmed by multiple sources, including cast members).

It’s too early to know when the new season will debut, but the source was able to provide a few more details: 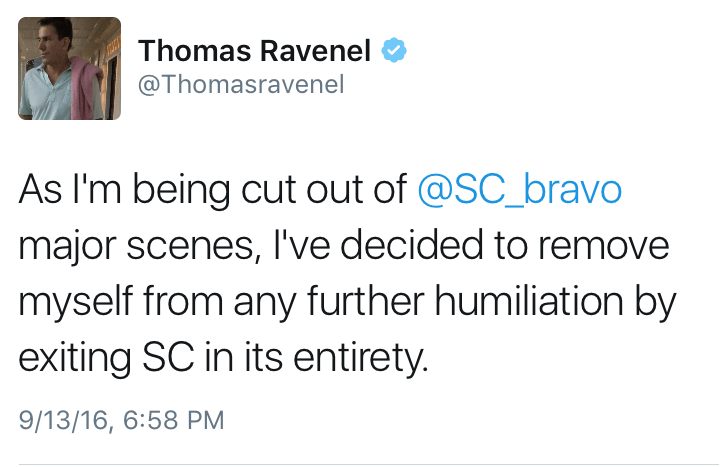 Of course, we’ve seen these type of declarations from him MANY times before, so take it with a grain of salt. These sort of tweets also have a habit of being deleted, which is why I took a screenshot. If the original is not removed, it can be seen here.

In addition, secondary cast members that are expected to return include Pat Altschul, J.D. Madison, and Naomie Olindo. Meanwhile, K. Cooper Ray tweeted that he would not be returning to the show.

UPDATE – 9/30/16: Kathryn Dennis appears to have tweeted that she will not be returning to the show after all. The tweet states, “Was excited to show the new me on #SouthernCharm but they aren’t interested. I want to thank my fans for EVERYTHING and wish #SC4 luck!”  You can see the tweet here.

Update – 10/26/16: Almost a month after announcing she would not be on the next season of Southern Charm, Dennis shared a story on Twitter saying she would be back after all.

Keep an eye on HCS for further updates…