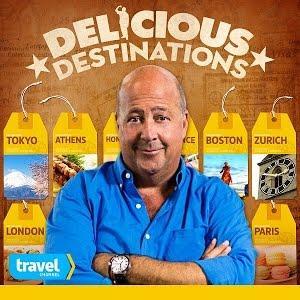 Tonight at 9 pm, The Travel Channel will debut the Charleston episode of Bizarre Foods: Delicious Destinations. The show, a spin-off of the original Bizarre Foods series, is hosted by Andrew Zimmern.

Instead of focusing on the off-the-wall culinary options of featured destinations, the updated version of the program highlights each city’s classic foods.

Charlestonians may remember that back in 2012, Zimmern’s Bizarre Foods America (yet another spin-off of the original series), featured the Holy City.  That episode featured Hominy Grill, Bowen’s Island Restaurant, Martha Lou’s Kitchen, McCrady’s, Scott’s Bar-B-Que, and more. You can watch that episode below.

Not much is know about tonight’s premiere, except that Bowen’s Island Restaurant will be included.
–